France is continuing to ease out of lockdown after months of battling the novel coronavirus. As the third-hardest hit country in the European Union, France has logged over 29,000 deaths from COVID-19, the disease caused by the SARS-CoV2 virus. Twenty-three new fatalities were recorded as of June 10, but new confirmed cases are at a one-week low, at an average of approximately 1,000 per day. This number is down from the 80,000 new daily cases that were reported in early March, when stay-at-home orders and business closures were enacted throughout the country.

“We can reasonably say the virus is currently under control,” Jean-François Delfraissy, the head of the government’s scientific advisory council, told France Inter radio last Friday. “The virus is still circulating, in certain regions in particular…but it is circulating slowly.”

The newest phase of the lockdown exit plan allows for cafes and restaurants in “green zones” to reopen, where the virus is less prevalent. Parks and restaurant terraces in Paris will also commence operations. Restrictions on travel beyond the current 100km-radius boundaries are set to be lifted. There are no more red zones – the highest stage of alert – in all of France, and there are only three orange zones, including the greater Paris area. “Freedom will finally become the rule and constraint the exception,” Prime Minister Édouard Philippe told reporters last week during a press conference presenting the new rules for Phase II.

To help prevent a resurgence of the virus through the use of contact tracing, the French government is rolling out the StopCovid mobile phone app. Like similar apps being used in other European states, StopCovid uses Bluetooth signals to anonymously log the presence of other app-users. The data is then uploaded to government-run servers. Users who test positive for coronavirus can use the app to notify others who were in close contact with them for 15 minutes or more, so that they too can self-isolate and seek treatment should symptoms develop.

While some French citizens view the app as a means to resume their normal lives, other civil liberties groups are concerned that tracing apps are a gateway to increased government surveillance. Cédric O, France’s junior minister for the digital economy, disagrees. “The problem with a centralised protocol is that you have to be confident and to trust your state, but we’re in a democratic state, we have checks and balances,” O told the AP. The French government has also asserted that the app does not track location and deletes user data after 14 days.

France is not yet permitting tourism, with border restrictions in place until June 15. However the country is keen to re-open “should the health situation permit doing so, without a quarantine period for travellers arriving from European countries.” The Eiffel Tower, a major tourist attraction, is set to welcome visitors again on June 25.

To help boost the economy and assist France in becoming more environmentally friendly, the government is offering financial aid to anyone purchasing a lower-emissions vehicle. This has the benefit of also boosting sales in a particularly hard-hit industry. The “eco bonus” will be applicable towards a maximum of 200,000 new cars. For new electric vehicles that cost below 45,000 euros, offers include a 6,000 to 7,000 euro bonus to individuals and 3,000 to 5,000 euros for professionals and companies. For cars that are more expensive than the 45,000 euro sticker price, the bonus will stand at 3,000 euros. Rechargeable hybrid models will qualify for a 2,000 euro purchase bonus. Anyone who hands in their old diesel or petrol-fueled car to upgrade to a more environmentally friendly model also gets a bonus under the scheme, ranging from 3,000 to 5,000 euros.

Meanwhile, France is pledging 15 billion euros towards its struggling aviation industry, which was hurt by the necessary lockdowns enacted to curb the spread of the coronavirus. “We are declaring a state of emergency to save our aeronautics industry so that it can be more competitive,” said Finance Minister Bruno Le Maire at a press conference in Paris on Tuesday. “If we hadn’t intervened right away, a third of the jobs in the sector would have disappeared…that’s around 100,000 of the 300,000 direct and indirect jobs in the sector,” Le Maire added.

The French economy is expected to contract by 10 percent this year due to the pandemic, with a recovery to pre-virus levels expected in mid-2022, according to the Bank of France.

Deconfinement is being complicated by a wave of protests around France, sparked in solidarity with the U.S. movement for Black Lives Matter in the wake of the killing of Black American George Floyd by a police officer in Minneapolis, Minnesota. Protests have since ignited across the rest of the world.

“This happened in the United States, but it happens in France, it happens everywhere,” Paris protester Xavier Dintimille told TIME magazine. While he said police violence seems worse in the U.S., he added that “all blacks live this to a degree”. These solidarity demonstrations were also in memory of Adama Traoré, a black Frenchman who died in custody shortly after his arrest in the summer of 2016. His case has become emblematic of the fight against police brutality in France.

A lawyer for two of the three officers involved in Traoré’s arrest said this particular case and the death of George Floyd “have strictly nothing to do with each other”. The lawyer, Rodolphe Bosselut, told the Associated Press that Traoré’s death was not linked to the conditions of his arrest but to other factors, including a pre-existing medical condition. The officers involved were exonerated on May 28.

Protests have continued despite a continued ban on gatherings larger than ten people. Some fear the large-scale demonstrations could cause a second spike of coronavirus infections. While initially peaceful, some of the protests in Paris – which numbered over 20,000 at their height – have shown a few actors light fires or topple construction barriers. Police have responded by using tear gas to force crowds to disperse.

Sociologist Sebastian Roché, who authored a book about police in democracy, told the newspaper 20 Minutes that in terms of violence, there is no comparison between the U.S. and France. “American police kill more than a thousand people a year, out of a population of 320 million inhabitants. The police in France kill 15 to 20 people in a population of 70 million.” But other comparisons can be made. “Police in the U.S. and France both target minorities. We see this during identity controls, the so-called stop and frisk policies.”

Jacques Toubon, France’s human rights ombudsman and Defender of Rights, supports Roché. In its annual report released earlier this week, the organisation showed that in 2019 young men of Arab and Black African background were 20 times more likely to be “randomly” stopped by the police than compared to the rest of France’s population.

“We’re demanding acts of justice, not discussions,” said Assa Traoré, Adama’s sister, at a recent press conference. “We’ll protest in the streets, every week, if necessary.” The family and “Truth for Adama” campaign group has called for a mass protest in central Paris this coming Saturday.

Prime Minister Phillipe has admitted that Floyd’s death “resonated with the fears and feelings of a part of the French population”. The country has sometimes fallen short of treating all its people equally, which is a founding principle of the Republic. “Collectively, we have not always necessarily been up to the challenge of the Republic’s principles.”

In a commitment to do better, the government announced this past Monday that it would ban the use of chokeholds to detain suspects – which has been blamed for causing past fatalities – and a zero tolerance for racism among police.

“Racism has no place in our society and even less in our Republican police. I will not let the hateful actions of some [officers] stigmatise the police as a whole,” Interior Minister Christophe Castaner told reporters. “I refuse to say that the [police] institution is racist, but yes some police officers are racist,” he added. 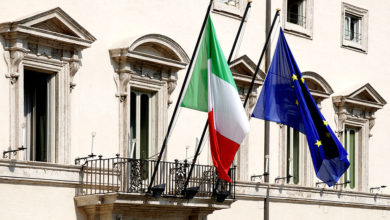