More than ten years out after the fallout of the economic crisis, there is an increasing number of Eurosceptics across the continent, also known as people opposed to increasing the powers of the European Union.

Given the rollercoaster that the bloc has been through the past decade, one can hardly be surprised. This rise has been heavily evidenced by recent election results across the EU, including a large influx of support for populist parties in Italy, for anti-EU French presidential candidate Marie Le Pen, Eurosceptic parties in Germany, and the election of Austrian Chancellor Sebastian Kurz whose government coalition put the country’s right-wing Eurosceptic parties in power—not to mention Brexit.

It’s no secret that anti-EU sentiments are rising at a grassroots level, mostly from those who have received the short end of the stick in an uphill battle Europe has fought to regain composure from after getting wrapped up in a global economic meltdown that it had little to do with starting.

While Europe’s cosmopolitan capitals and large westernised cities have reversed the downward spiral and are now humming along at standard economic speed, smaller, less populated provinces are still struggling. These areas gained less resources and less attention, both during the financial crisis and in the initial push to deregulate economies and adopt initial EU standards.

As time passes and WWII begins to fall off the radar of our modern interpretation of Europe, the European Union— the world’s biggest peace project— is being seen as a cage for many who are facing fears of security and employment, both of which are impacted by surging issues like the continent’s migration epidemic.

No one, not even the EU member states themselves, will deny the need for reforms. The principles on which the EU was founded are sound, while some of its current frameworks are not. Problems like the uncontrolled migration influx and stubbornly high levels of youth unemployment in certain countries— both which have increased in size and gravity— call for a change in the EU’s modus operandi.

To this end, several leaders throughout the region have put forth suggestions to bring the group’s operations up to date in an effort to meet the needs of more EU residents who may not feel all too happy to be citizens of the bloc. They include greater integration and cohesion between states both financially as well as socially, while acknowledging that a diverse 27-member group may need to operate at more than one speed.

Leaders just parted ways at the end of last week in Europe’s de-facto capitol, Brussels, after discussing a range of topics, principally the way the Union will move forward following the UK’s withdrawal from the bloc. In the face of a decision by the British public that was undoubtedly a result of Eurosceptic fear and frustration, the other 27 members made a pledge of unity moving forward. That is notwithstanding several looming uncertainties, including how remaining members will fill nearly one-fifth of the bloc’s budget, which will disappear along with the UK.

There are several methods that European leaders have put forth to strengthen the pack, rather than run for the hills. European Commission President Jean-Claude Juncker has long been pushing for a uni-vision for Europe. He’d like to realise this through the creation of EU-level unions for sectors like energy, security, capital markets, banking and increased digitisation of the bloc. While some have found his “nothing but the single market” approach to be too rigid for such a diverse crowd of more than two dozen nations, his concept has helped push through reforms like the elimination of all roaming charges between wireless carriers within the European Union.

French President Emmanuel Macron has hit the ground running since his entrance into office to bring the European Union back to the centre of international politics. His opinion on Europe’s solution to widening differences is to accept that there is no pan-European solution, and capitalise on that fact. With the support of several Western and all Southern European nations, he has called for the creation of a multi-speed Europe, which would offer different members of the EU to integrate at varying levels and speeds, depending on the economic situation of each individual country.

While this approach has been met with a fair amount of opposition from certain bloc members, he has made a powerful bond with German Chancellor Angela Merkel, with whom he is creating new initiatives on eurozone governance. Both France and Germany have called for further integration of financial governance between all 19 countries which use the euro currency, in the hopes of balancing a somewhat off-kilter budget between currency sharing nations.

He is also pushing for the creation of an Economic and Monetary Union and a coordinated corporate taxation policy that would level the playing field within Europe and eliminate the existence of more and less tax-friendly countries. Europe-wide legislation in this regard would increase the investment potential across the board, instead of favouring certain states.

Chancellor Merkel not only committed to Germany’s willingness to make more financial contributions the Union, but she also recommended a method of linking EU funding to each country’s level of compliance with EU policies— an idea that was surprisingly not met with any backlash from European leaders at last week’s summit in Brussels. This framework would certainly increase efficiency in EU-level policies and force those who tend to lean away from group to feel the monetary pitch of their individualist decisions.

Greek Prime Minister Alexis Tsipras, for his part, has brought up the need to focus not just on fiscal and economic policy, but also on social policy. After all, the scattered social dynamics of Europe are the source of increasingly despondent views on the bloc. “As much as we need a Minister of Finance, we also need a Minister of Social Cohesion in the Eurozone. Because, the absence of credible commitments to social objectives…is a huge political mistake.” He highlighted that “it alienates citizens from Europe and its processes. Especially in those countries that have experienced….the social cost of the crisis.”

Coming this June, the European Council will gather to tackle some of the biggest issues that have threatened to tear it apart. Luckily, the majority of attending members are bringing concrete EU-improvement ideas to the table. During the summit, the bloc would do well to narrow its efforts in the short term, by sticking to region-wide hoops it knows it can jump through. This means an increased focus on financial cohesion to tackle the bloc’s still ailing banking sector, a change all member states would like to see.

While migration is a mammoth issue that seems to tread on very narrow common ground between member states, the issue is too paramount for the bloc to continue kicking the can down the road. Implementing a carrot-and-stick policy as suggested by Chancellor Merkel seems to be the only method on the table which would hold all parties accountable at an equal level. While it’s not perfect, it is certainly superior to the status quo, which has frontline countries forced to bear the heavy weight of rapidly growing migration numbers.

Amid a sea of increasingly complex international relations between regional and global hegemonies, EU member states need the strength of the pack now more than ever. From trade wars to nuclear bomb threats and increasingly xenophobic national leaders peppered across the world, EU states must lean in rather than retreating to their respective corners in order to remain unscathed in the face of growing global threats. By committing to the improvement of the bloc, the European Union will be able to meet its full potential as the most powerful set of combined countries in the world and truly emerge greater than the sum of its parts. 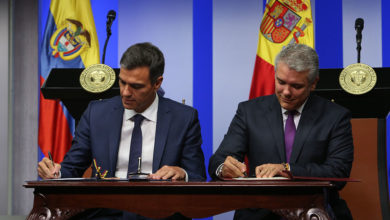